Jageshwar Shiv temple is one of the oldest shiva temple in India. Jageshwar is situated at an elevation of 1,870 mts above sea level and at a distance of 37 kms from Almora. Jageshwar is an important tourist destination of Kumaon and receives thousands of visitors every year. Jageshwar is a Hindu pilgrimage town in Almora District, dedicated to Lord Shiva, northeast of Almora and around 101 Kms away from Nainital in Kumaon Region of Uttarakhand Uttranchal.

The temple city of Jageshwar comprises a cluster of 124 large and small stone temples, dating 9th to 13th century AD, with many preserved by the Archaeological Survey of India (ASI), which include Dandeshwar Temple, Chandi-ka-Temple, Jageshwar Temple, Kuber Temple, Mritunjaya Temple, Nanda Devi or Nau Durga, Nava-grah Temple, a Pyramidal shrine, and Surya Temple amongst which the oldest shrine is the ‘Mrityunjaya Temple’ and the biggest shrine is the ‘Dandeshwar Temple’. Once the centre of Lakulish Shaivism, in the Jataganga river valley near a Deodar forest (Cedrus deodara) starting from Artola village on Almora–Pithoragarh highway, where two streams Nandini and Surabhi flow down the hills in the narrow valley and meet near the sacred spot.

The townfolk believe that Jageshwar is the place of Nagesh among the forest of Deodar, 8th among the Dwadasa Jyotirlingas: the twelve resplendent lingas of Lord Shiva established by Lord Vishnu. The ‘Jageshwar Monsoon Festival‘, held between 15 July to 15 August takes place at Jageshwar during the Hindu calendar month of Shravan, and the annual ‘Maha Shivratri Mela’ (Shivratri festival), which takes place during spring has an important place in the calendar of the entire Kumaon region. 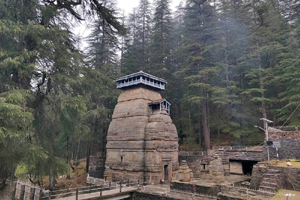 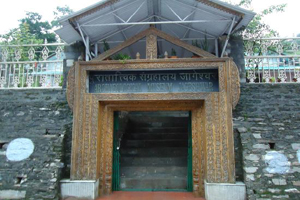 The Archaeological Museum, maintained by the Archaeological Survey of India, houses yet another exquisite collection of the anciently carved idols and old world representations of the deities. With galleries containing pieces dating back to the 9th and 13th century AD, the most prominent figures are those of Uma-Maheshwar (regional names for Parvati-Shiva) and the Sun god and the Nav Graha, or the nine planets, that figure as gods in the Hindu mythology. The museum is undoubtedly worth a visit, not only for those who belong to the religion, or are intrigued by its complexities, but by everyone who wants to know the true roots of the third largest religion in the world. The most noteworthy figure is of one of the rulers of the area, Pona Raja, who is still well respected and remembered in the region.

Mahamrityunjay, is made from three words. Maha, meaning great, mrityun, meaning death, and jaya, meaning victory. Hence the word itself literally translates to the great victory over death. This temple hence, has a great many number of devotees, visiting the lingam (the stone idol representing he God), perched between the opening of an eye. The temple is ever reverberating with the chants of Mahamrityunjay Mantra, and the deity is believed to grant all wishes when worshipped with true devotion. The idol itself, is one of a kind carving, with no similar representation anywhere in the country. 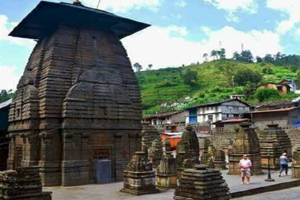