Rudraprayag is the confluence of River Alaknanda and River Mandakini, Rudraprayag is a sacred place regarded as one of the Panch Prayags and place of great religious significance. Settled in Uttarakhand, this beautiful town is full of mysterious charm and the spiritual vibes that will calm your senses.

Offering spectacular views and mesmerizing panoramic vistas, the town boasts of being blessed by Mother Nature in its full glory. The town derives its name from the Hindu deity Lord Shiva who is said to have appeared at the place in the form of Lord Rudra. Rudraprayag is sprinkled with several ancient temples and serves as a gateway to two major pilgrimages of Kedarnath and Badrinath, offering its visitors a surrounding of serenity and tranquility. Tourists also get enchanted by its natural dazzling beauty and spellbinding landscapes. Tourists and devotees flock this place in large number seeking spirituality as well as nature's splendors.

The famed town of Rudraprayag is named after the Rudra avatar of Lord Shiva. This heavenly town is encircled by the emerald lakes, glaciers, foaming rivers and silver streams. The pristine town of Rudraprayag is nestled on the holy confluence of Alaknanda and Mandakini rivers, at 34 km from Srinagar (Garhwal). It is perched at an average elevation of 895 metres about 2,936 feet above sea level. Rudraprayag is blessed with nature's bounty, the climate of which depends upon the height of the region.

Dhari devi - the upper part of Goddess Kali is believed here, while lower part is in Kalimath and praised as Goddess Kali. Locals also believed that the appearance changes with time from a girl, to a woman and then to an old lady. There is a legend about the name behind the Dhari devi temple. Once the temple was washed off by floods and the idol of Goddess Kali struck against the rock. The people of the Dhari village nearby heard the divine voice of Goddess and then fixed the ido of Goddess Kali at this spot. After then this temple is known as Dhari Devi temple. Legends also believed that the Dhari Devi idol shall not be put under any roof. So there is always an open sky above idols in Dhari Devi Temple. Taking photographs of Dhari Devi idols is strictly prohibited. 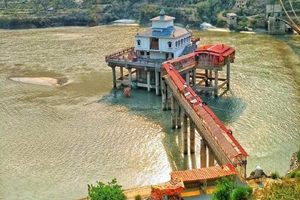 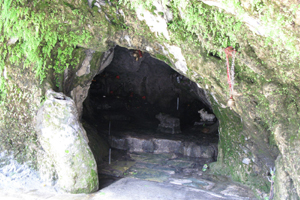 Koteshwar Mahadev temple is a cave temple situated on the banks of River Alaknanda. It is a common belief among the devotees that Lord Shiva meditated in the caves while on his way to Kedarnath where one can witness the naturally formed idols. A fair is organized by the temple during Maha Shivaratri and devotees visit during the time in large number.

Augustmuni is the famous temple of Rishi Augustya is located in Agustyamuni, rudraprayag and the village gets its name (Augustyamuni) from it. Phata, is around 50 kms from Augustmuni enroute to Kedarnath and 18 kms short of Gaurikund. It is said that the temple was once flooded with water and was brought to ruins. It was then seen by a local in his dream. When people visited the temple, they found Saint Augusta's Kund and established his idol at the same place which is still worshipped in the form of Saint Augusta. There is also a temple of Saint Augusta's Guru Mahadeva in this place. 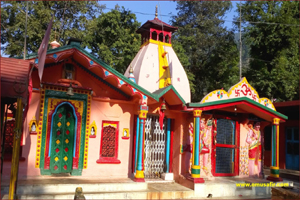