Rajaji National Park is situated in the state of Uttarakhand. The park was named after Late Shri C. Rajagopalachari (also known as Rajaji) who was a prominent leader freedom fighter and first governor general of India. Jungle safaris are offered at two locations currently, Chilla and Motichur Ranges. Visitors can enter from one of the seven gates at Ramgarh, Mohand, Ranipur, Motichur, Chilla, Kunao and Laldhang. The picturesque beauty and rich biodiversity of the park serve as its major attractions for both nature lovers as well as wildlife enthusiasts. In the year 1983, Rajaji Wildlife Sanctuary of Uttaranchal was merged with Motichur and Chilla wildlife sanctuaries and made into Rajaji National Park. Rajaji National Park of India spreads over an area of 820.42 sq km and is open to visitors only from Mid-November to Mid-June.

Rajaji has the largest population of elephants in Uttarakhand (over 500) giving you excellent opportunities to study the pachyderms. Rajaji is also the first staging ground for migratory birds once they cross over the Himalayas into the Indian subcontinent, so you are bound to meet many feathered visitors in the winter months. Rajaji is spread over 820 square kilometres and was formed in 1983 by merging three wildlife sanctuaries - Chilla, Motichur and Rajaji. The Ganges cuts through these forests and is home to a wide variety of fish like trout, mahseer and chilwa.

Rajaji National Park is distinct for its pristine scenic beauty and rich bio-diversity. A paradise for nature lovers and wildlife enthusiasts, the wildlife of the park is blessed with elephants, tigers, leopards, deers and ghorals as its best known life forms. Three sancturies in the Uttarakhand, Shivaliks – Rajaji, Motichur and Chila were amalgamated into a large protected area.

Rajaji is a magnificient ecosystem nestled in the Shivalik ranges and the beginning of the vast Indo–Gangetic plains, thus representing vegetation of several distinct zones and forest types like sal forests, reverine forests, board–leaved mixed forests, scrubland and grassy. It posseses as many as 23 species of mammals and 315 bird species. The abundance of nature’s bounties heaped in and around this park, are bound to attract a large number of wildlife conservationalists, nature lovers and eco-friends to visit this most breathtaking wilderness area. To enjoy the wild life and nature in its pristine and undulated form, the jungle safari in Rajaji National park is a perfect option. The enchanting experiences of nature walks, Jungle safari by walk or by vehicle at Rajaji National Park is really awesome.

Adventurous tourists can venture out for Jeep Safaris and Elephant Safaris in the 34 km long tracks of Rajaji National Park. One can make a breath taking safari through hilly terrains, lusting greenish valleys and plains, undulating forest tracks, vegetated river beds, thick and dense forest lands and unexplored sprawling grasslands. During the safari one can spot many wild animals including Asian Elephants, Tiger and King Cobra, Panther, Bear, Chital, Sambar, Wild Boar, Kakar, Python, Monitor Lizard, Wild Cats. You can also spot many birds and many species of different plants, shrubs and trees. 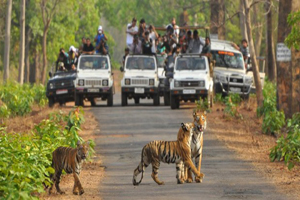 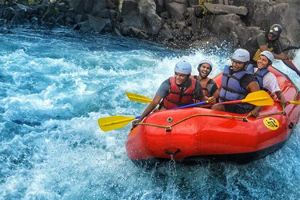 Rafting and canoeing are other adventurous things to do in Rajaji National Park. 3-hour-long rafting tours on stretches exceeding 12 km on the streams of River Ganges are offered on request. The jungle lodges inside the national park provide this facility at INR 800 per person. In Rajaji National Park, Rafting is done under the guidance of expert guides at the time when the permission is given from the competent Government authorities. As the river takes you to its emprising journey, bag the moments you brag about to your friends and colleagues. Come to experience the best of adventurous sports through rafting in Rajaji National park.

The Chandi Devi Temple of Haridwar is a charming temple dedicated to the Chanda Devi Goddess, perched on the Neel Parvat of the Shivalik Hills. The Chandi Devi Mandir, also known as Neel Parvat Teerth, is one of the five pilgrimages of Haridwar and is also known as Siddha Peetha, a place where devotees worship to fulfil their desire. Because of its location, the Chandi Devi temple is also a preferred choice for trekking tourists. The historic beauty of Chandi Devi Temple is best experienced as you hike your way up to the top. With the verdant greenery of the surrounding, you will certainly feel the presence of the divine around you. Being one of the oldest and revered temples in Haridwar, this shrine has a tremendous footfall throughout the year. One of the most festive time here is during the festivals of Chandi Chaudas, Navratra and Kumbh Mela when the temple sees amazing celebrations and massive participation. The Chandi temple during the festival time is a must visit. 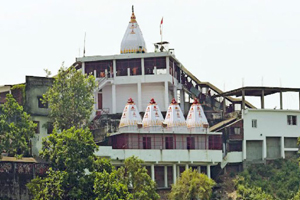