Uttarkashi, literally meaning 'Kashi of the North' is also nicknamed as ‘Somya Kashi’ and ‘Shivnagri’, like Kasi, the town of Uttarkashi also houses the sacred Vishwanath temple. This holy shrine features a copper trident, having a circumference of 1 meter. This is a quaint little town tucked away in the hill state of Uttarakhand. Revered by the Hindus as one of their propitious religious sites, the townhouses two of the total four holy shrines of Hindu mythology. It is one of the most visited cities of religious relevance in the area and gives you a sense of heightened divinity and an out of the world experience. The region was more in the favour of religious tourism initially but lately the spurring of trekking and adventure activities invites a lot of non religion tourists as well. Replete with ashrams and mandir, the town has got a spiritual vibe to it. All in all, the entire place boasts of divine heritage, mesmerising natural beauty, scenic panoramas and a wonderful irenic atmosphere.

Uttarkashi is one of the younger parts of Uttarakhand, formed in 1960. There is an uncanny purity about the place, making it one of the most visited cities of religious relevance in the area. Totally untouched by industrialism, except to simplify the existence, without over altering, the town is like no place you have ever spent your time in. While lakes and temples are in great numbers, the whole aura of religion is not over powering. Uttarkashi will give you a sense of heightened divinity and an out of body experience, and it is one of the fewest places doing so, even on the trekking routes it has to offer. Visit Uttarkashi, only if you're truly ready to revamp yourself, inside out.

The charming town of Uttarkashi is quite popular amongst the adventure enthusiasts as it offers several opportunities for trekking, mountaineering, and adventure sports. It is also known for the wide variety of coniferous vegetation such as fir, pine, deodar, medicinal shrubs and herbs. Uttarkashi is one of the most picturesque town of Garhwal region of Uttarakhand state.

The near perfect example of true grit and determination being rewarded with a dream of a lifetime, is your trek to Dodital Lake. A day long of non stop trekking, with your path flanked by towering alpines, reaching a crystal clear lake filled with enough trout to please any protein lover, and a view to die for, because it's only heaven where you experience bliss, like you do at Dodital. Perched at a height of 3307 feet, you even have the option of a lazy day out after a tiring trek, with a bucket full of bait and fishing rods, once you've obtained permits from the Divisional Forest Officer of Uttarkashi. A nice day out for a group of friends, packed with adrenaline and a truck load of frolic. 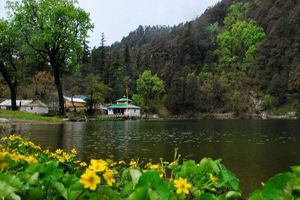 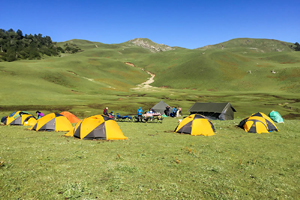 This is a classic trek for trekkers keen to discover the outdoors and experience the mighty Himalayas at high altitude. Dayara Bugyal, along with its twin, Gidara Bugyal, is perhaps one of the most beautiful alpine meadows in India. The meadows stretch out far and wide and all around the meadows are the many towering snow peaks. Situated at an elevation of 3048m, Dayara Bugyal is second to none in natural beauty. On the onset of winters they transform into ideal ski slopes over an area of about 28 sq km. The Bugyals and the sky around with their every changing hue can show you new scenery at every season of the year.

A journey to Nachiketa Talis ideal for a mini retreat for a day, is what may help you if you're looking to get away from the buzzing holy town. A trek of about 3 km opens up to a path strewn heavily with leaves, making it look like Autumn had been vacationing here. Story goes, that Nachiketa, the son of saint Uddatal, had made the lake and given it its shape and, and hence the lake is named after him. The Himalayan peaks are bobbing up and down your view while on the trek to finally reveal themselves around in all glory. A picturesque hut on the corner of the lake with white fencing makes the view picture perfect. Visit Nachiketa for a tranquilizing effect on your mind and senses. 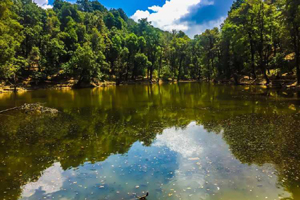