The Jim Corbett National Park is the oldest national park which got established in the year 1936 by the name of Hailey national Park in the Nainital district and Pauri Garhwal district of then Uttar Pradesh, now Uttarakhand. It was established to protect the endangered Bengal Tiger and was the first such project to come under Project Tiger initiative.

It is named after Jim Corbett, the famous naturalist and the legendary hunter of the man-eaters of Kumaon.Prior to its formation, the park was the private property of Tehri Garhwal princely state. The Raja of Tehri ceded a part of the region to the East India Company in exchange for their assistance to remove Gurkhas. It was also the territory of Boksas, a tribe from the Terai who used to grow crops, but in 1860 they were expelled by the British. The region rose to prominence in the early 19th century, when it came under the control of British officer, Major Ramsay, who was also the incharge of the area.


Corbett National Park comprises 520 square km area of hills, riverine belts, marshy depressions, grasslands and a large lake. The elevation ranges from 400m to 1220 m. It is home to a plethora of wildlife species out of which some are endangered. This wildlife sanctuary & tiger reserve is home to 488 different species of plants and 600 species of birds, leaving aside several species of mammals and reptiles. It includes Tiger, Elephant, Chital, Sambhar deer, Nilgai, Gharial, Cobra, Flying Fox, Indian Pangolin, Hedgehog and etc.Thus, this makes Corbett Wildlife Sanctuary one of the most visited national parks in the country.

The main areas for tourists are the Dhikala Tourism Zone (entry through Dhangarhi Gate) and the Bijrani Tourism Zone (entry through the Amdanda Gate). The magical landscape of Corbett is well known and fabled for its tiger richness.This wildlife sanctuary doesn't restrict you with only wildlife safaris but also challenges you with numerous adventure activities around it. If you feel comfortable in some adventure activities then one can enjoy activities like River Rafting, Angling, Rock Climbing, Bridge Slithering, Rappelling and etc.

Throughout the year but winters are best to witness this park at its beauty. 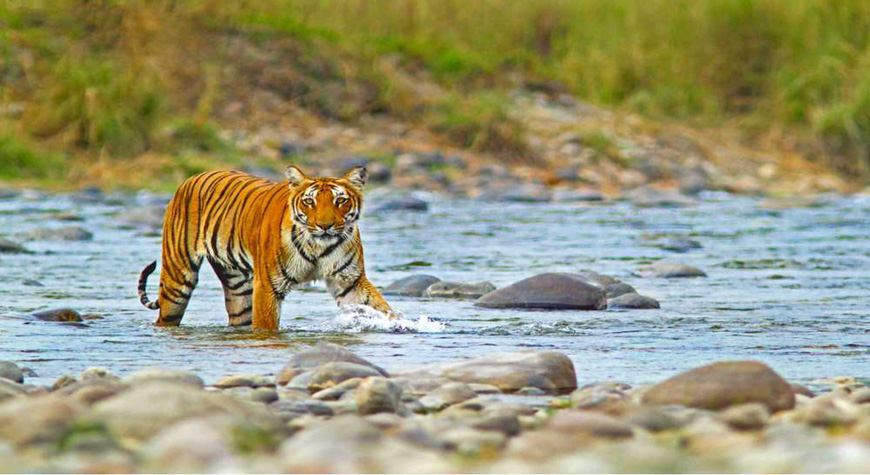